In an era of hashtags and viral videos, it is perhaps an unlikely, old-school medium for political dissent. Activists are sending them by the millions.

A grass roots army of almost 40,000 is hand writing postcards to voters on behalf of Democratic candidates. Whether it works is open to debate.

Get-out-the-vote mailers are not a ground-breaking idea. But the key to Postcards to Voters is twofold: one is those personalized cards, in all of their handwritten glory. And the second is a list of addresses belonging to prospective Democratic voters across the nation.

When Maddy attended a postcarding party with her parents in her hometown of San Francisco, she wasn’t sure what to expect. The group sat around a table, hand-writing postcards to help get out the vote for Conor Lamb. 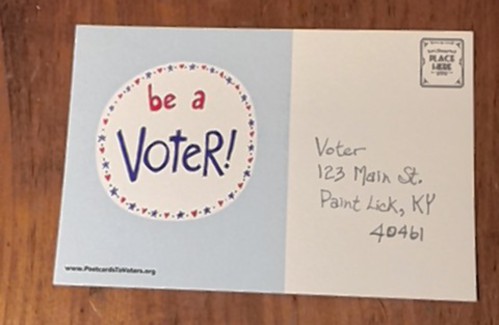 Not long ago I was reading Julian Barnes’ Man Booker Prize-winning novel The Sense of an Ending when a sentence jumped out at me: “In those years before mobile phones, email and Skype, travelers depended on the rudimentary communications system known as the postcard.”

Volunteer organization Postcards to Voters has been recognized as a National Ally by Democracy Legacy Action.

Yesterday was like any other day when I went to the mailbox: bills, catalogs, coupons, but then there were two post cards. Postcard number one was shiny and new. It was printed on that nice, slick card stock and reminded me that it was time to vote….

Is a “wave” election forming that will sweep scores of Democrats into Congress, governorships and legislatures? Not so fast, say Republicans, who are banking on a bump from the tax cut bill.

A new group is trying to use Magic Markers and the power of the internet to influence elections in Wisconsin and around the country.

An out-of-state Democratic group is targeting an Iowa statehouse race, hoping to turn a Republican house seat from red to blue. The volunteer organization